one for the road

HEY GAMERS, today is 9/17 meaning that at 8 PM EST we are all about to catch a terminal case of DELTARUNE BRAIN. So before that happens and we all forget our surroundings for some unspecified period of time, I would like to catch your attention for a few moments! Thanks!!

"Feral," I imagine some of you have been wondering for some time, "did you not say that you wanted to do a Japanese translation of Refinery? What's going on with that? Have you simply abandoned those plans?"

If you have been wondering this, I am happy to say you don't have to wonder anymore. The Japanese translation of Refinery IS in progress, and is in fact fully implemented through Day 2 of the main scenario--it only needs to go through quality check via my native-speaker friends for that part of the game to be complete. 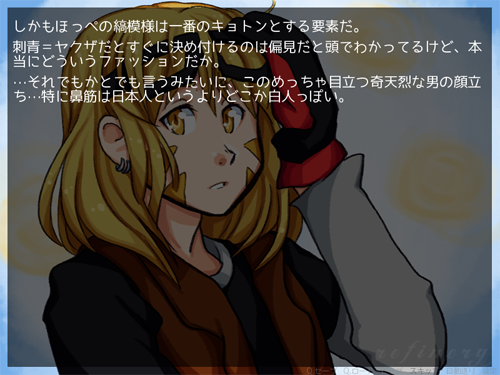 I am also happy to announce that there will be a DEMO of the Japanese edition covering the main scenario up through Day 3, like the English version did. Putting that out before the end of this year would be cool but I have too many irons in the fire to make promises, so I shan't. 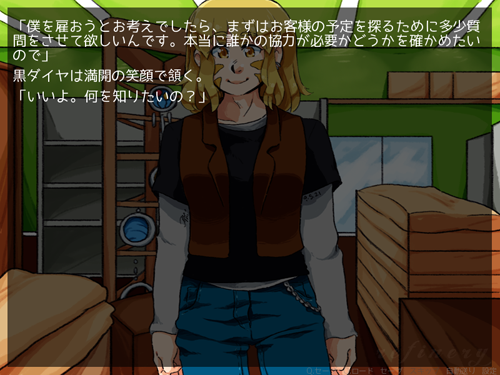 However what I CAN announce is that the Japanese demo will have a much-needed GRAPHICS UPDATE. Which is to say, ALL CHARACTER TALK SPRITES PREDATING LATE 2015 ARE BEING REDRAWN.

"didn't you say you weren't gonna--" I did, in fact, choose not to do any redraws back in July '18 when I yote v1.00 into the wild after, like, 8 full years of suffering, in interest of actually being able to release the damn thing; however it is now September '21 which is 3 years later and "assets I drew 4 years ago" feel a lot different from "assets I drew 7 years ago" in terms of unbearability, especially when one is planning to put one's work in front of brand new eyeballs.

This change will ultimately affect all character talk sprites from Day 5 and earlier, though obviously the demo will only be up to Day 3. The CGs are NOT going to be redrawn because they are significantly more work to redo than sprites. 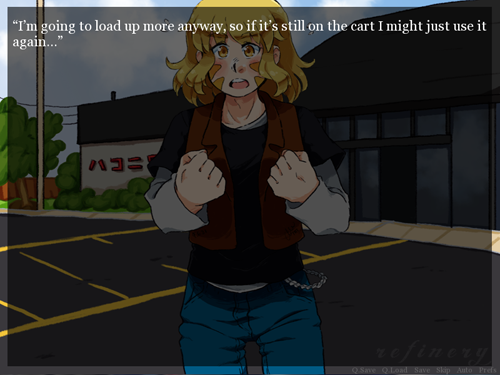 I'm not going to be leaving the English version of the game out in the cold, either; coinciding with the JAPANESE DEMO, the ENGLISH VERSION will be getting an update featuring the new sprites as well.

Let me reiterate, though, that there's no actual release date planned for these things yet. They are simply looming ominously in the distant horizon, like that one part of Hollow Knight, except that the game will not come to you any faster if you attempt to pick a fight with it. No, they are simply out there, approaching at their own pace. When they are ready they shall manifest before you, and it will come as a nice surprise to everyone.

That's it for now, especially with DTR ch2 rapidly encroaching; catch y'all on the flip side.